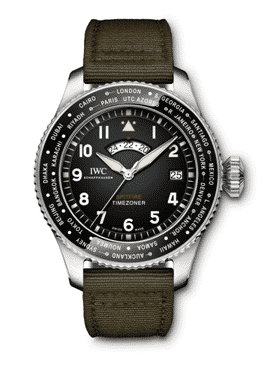 Finally, “The Longest Flight” (IW395501) is the Pilot’s Watch Timezoner Spitfire Edition. IWC calls this model the collection’s highlight. A limited 250 IWC watches edition. The Timezone Spitfire combines the Timezoner mechanism with an automatic movement manufactured by IWC (82760) for the first time in the history of IWC. All this with steel back, green textile strap and a thickness of 125.2 mm in a 46 mm steel case. The Caliber 82760 is a 25-Jewel movement with a power reserve of 60 hours. Date, Central hacking seconds, Timezoner function to set another time zone using the rotating bezel, a 24-hour display for Worldtimer function. a special edition of Watch to the project “Silver Spitfire–The Longest Flight.” It was developed specifically for the two pilots, Steve Boultbee-Brooks and Matt Jones, to help them circumnavigate the globe in a Spitfire. Steve Boultbee Brooks and Matt brought the project to life in a 2nd World War Spitfire plane that Boutlbee Brooks had purchased at a Bonhams auction in 2009. 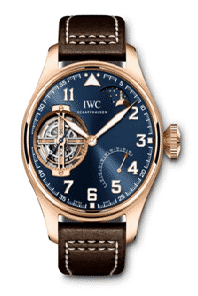 IWC produced a case made of 18-carat hard gold, a special variant of 5N gold, for this watch, and for the first time ever. The sophisticated manufacturing process changes the microstructure of the alloy, making hard gold significantly harder and about 5 to 10 times wear-resistant than conventional 5N gold. The hard gold case and the crown make a beautiful contrast to the blue dial as well.

The patented mechanism of constant force disconnects the escape from the direct flow of energy transmitted through the wheel train and increases the voltage in a balance spring second by second. The latter temporarily stores the energy before distributing it to the escape wheel in absolutely even impulses. It guarantees an extraordinarily high level of accuracy together with the tourbillon. The caliber produced by the IWC 94805 also features a perpetual display of the moon phase. On the moon stands the little prince. In two barrels, a 96-hour power reserve is stored. 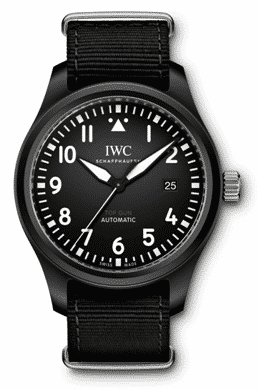 Supersonic jet noeuvres such as the F / A-18 Hornet and aircraft carrier missions lasting months: the demands placed on naval aircraft personnel and materials are incredibly high. TOP GUN watches are made from robust, corrosion-resistant materials such as ceramic and titanium, specifically for the unusual needs of the flying crews of the US Navy. The Watch Automatic TOP GUN of the Pilot is equipped with the caliber 32110 produced by the IWC. The robust and reliable automatic movement has two-way pawl-winding that builds up a 72-hour power reserve. This sporty watch is housed in a case made of non-reflective, black zirconium oxide ceramic with a diameter of 41 millimeters and fits perfectly on any wrist. 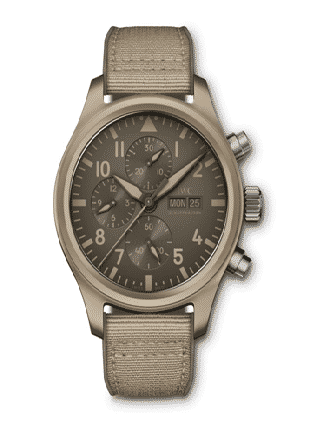 The sand-colored ceramic was inspired by the Mojave Desert, where the China Lake Naval Air Weapons Station, the largest single landholding in the United States Navy, is located. For 12 years now, the TOP GUN collection has been part of the IWC Pilot family. It was when the brand and the U.S. were in 2007. The Navy Strike Fighter Tactics Instructor program collaborated, resulting in the first models of the TOP GUN. Throughout this 12-year period, the main common feature was the black case of the watches, many different variants emerged. Ceratanium for the Pilot’s Watch Double Chronograph TOP GUN Ceratanium and for the “Mojave Desert” edition a sand-colored ceramic case. A case color that hasn’t been done before by IWC.

Ceratanium is not an IWC new material. Back in 2017, the brand used this alloy with its 50-year Aquatimer edition. Ceratanium is as light and strong as titanium but as resistant to scratching and as hard as ceramic. The perfect mixture, one would say, of two already great materials. A TOP GUN watch came out with a Ceratanium case this year for the first time.

That timepiece was a double chronograph at the top of the line. Other than the ceramic case color, both watches are the same. Size-wise we look at a 15.7 mm thick whopping 44.5 mm case. The case looks like it’s made if plastic at first glance. Before painting, like what model cars are made of. It’s matte and even. Luckily, this is very far from the truth. The ceramic case is light and sturdy. You realize that this material isn’t plastic at all if you touch it. 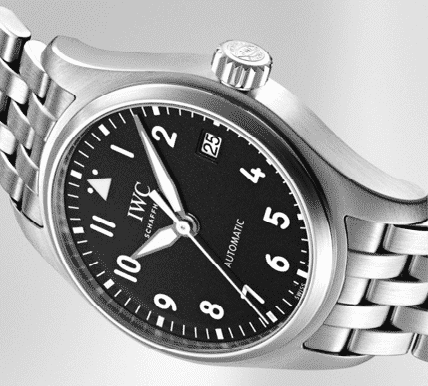 Over 80 years ago, IWC’s Pilot’s Watches were developed as robust and reliable airborne celestial navigation instruments. That also determined the distinctive look of the instrument that characterized the design of the watches to this day. SIHH 2019 introduced the IWC Pilot’s Watch Automatic 36 IW324010. Where earlier editions of the IW3240 feature more elaborate dials and polished elements, the IW324010 has its larger siblings ‘ instrumental looks-a matte black dial and all-brushed finish.

This version of the Pilot’s Watch Automatic 36 was inspired by Pilot’s Watch Mark XVIII’s iconic design. Not only does the watch fit perfectly for a slightly slimmer wrist with a diameter of just 36 millimeters, but it also marks a return to the original size of the Mark 11 navigation watch produced in Schaffhausen for the Royal Air Force (RAF) in 1948. The watch has a case made of stainless steel, a black dial and hands plated with rhodium. The technical features include a soft-iron interior case to protect the movement from magnetic fields and a front glass specially secured against sudden pressure drops.