You are here: Home / Uncategorized / Oppo A7 review: Does it stand upto its price point?

Launched in August 2018, Oppo A7 came back in the business as the successor of A5. With big display and battery life, it looked similar to its predecessor. Though we found a waterdrop notch, still we find it in every new phone now- Nothing new.

With 4GB of RAM and massive 4,230mAh battery, the phone will cost around 17,000 Indian bucks. Oppo A7 is competing with Realme, Nokia, Honor, and Xiaomi in this range. But, does the phone beat the others? You can explore amazing prices deals by using available Amazon Coupons to get your best offers. Let’s check out in the Oppo A7 review below: 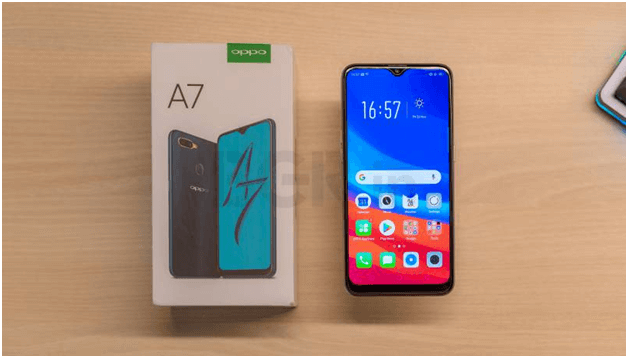 Oppo A7 comes with a waterdrop notch to give the device a good look and give more screen space. If you have to take a look at F9 of the same brand, you might find it similar. The rear body is of plastic with matte finish given to it. It gets a texture on the back too which looks really good. But plastic back, I am totally against it. Though it kind of feels like laminated, still it isn’t a very good feeling. canvaAt the back, Oppo A7 also packs a lightning fast fingerprint reader but catches fingerprint smudge easily.

Coming to the display, the device packs a 6.2-inch LCD HD+ (1520×720) display. Though the display is good, only HD+ is a huge question mark. The waterdrop notch on the front gives more screen space and with the thin bezels at the sides and bottom acts like a cherry on the cake. Although, the upper bezels are quite thick.

The phone also has face recognition feature which works pretty fine like other phones like Realme U1 and Realme 2 Pro.

Under the hood, Oppo A7 gives us a weak Snapdragon 450 at the range of Rs. 17,000. In this range, we expecting MediaTek Helio P60 or Snapdragon 636, but not this time. Companies offer this under the range of Rs. 10,000. With this weaker SoC pairs a 4GB of RAM onboarding 64GB storage. Honestly, the device is very weak in the performance department as on the AnTuTu it got the disappointing score of 72,081 points only. You can also check best gadgets online with Flipkart Coupons available to launch this year.

Oppo A7 packs a great camera quality as it has always been providing. Oppo A7 packs a dual cam set up at the back with a 13MP primary sensor with an f/2.2 aperture and a second 2MP sensor with an f/2.4 aperture for depth sensing. Features like autofocus, HDR, Portrait Mode are also included. Though autofocus is damn slow and the company has given no PDAF, the only good thing is HDR which turn on automatically. Honestly telling in good light, the camera does great but when in low light, it fades away.

For the selfies, the device offers a 16-MP camera. Unlike, the rear camera’s performance in low light, front shooter performs fine. It also has an AI beautification mode to smoothen the skin as iPhone XS does.

Coming to the battery life, Oppo A7 has the same battery as its predecessor with 4,230mAh on board. The battery is excellent and will work for the day and a half on a typical day. With heavy usages like gaming and stuff, it will still give you a great performance.

The Oppo A7 runs Android 8.1 Oreo out of the box with ColorOS 5.2. You will get new features in the device like SmartScan which lets you capture text and then translate or convert it into an editable form. Moreover, a new feature like ORoaming is also pretty fine which lets you subscribe to the data packs when you travel abroad. Like every ColorOS device does, this device too gives loads of shortcuts and gestures to do the job fast and fine.

The device at this price range doesn’t give us something new but a weak SoC. It has some goods like a great design and excellent battery life but the low light camera quality, HD+ screen and over that SoC wash that all away. At this price point, there are many devices you can go for like Nokia 6.1 Plus, Realme devices and Xiaomi Redmi Note 6 Pro. For me, the device gets a thumbs down- things went wrong for Oppo this time.